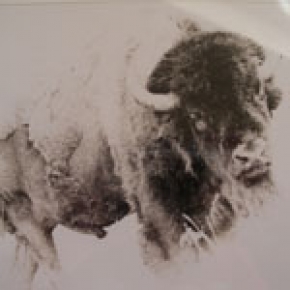 The buffalo has been our logo since Creative Western's incorporation in 1993. The company has evolved since and so have its people. Our mission statement reflects our visions and the philosophies we believe and so does our new logo designed by a young Native Cree.

The buffalo is indeed important to us because of its significance and meaning, which mirror our value system and our beliefs of a more just and sustainable future. In native mythology the buffalo represents RESPECT and also stands for WISDOM, GRATITUDE, SACREDNESS, PROSPERITY and ABUNDANCE.

The buffalo, through giving its life and sharing every part of its being, showed the deep respect it had for the people. The buffalo also teaches us to remain well grounded, provide abundantly for others, find the strength to carry on our path, be in harmony with Mother Earth, to give selflessly from the heart with pure intent, the meaning of sacrifice, and the sacredness of life.

In Native spirituality, the Medicine Wheel represents harmony and connections and is considered a major symbol of peaceful interaction among all living beings on Earth.

Medicine wheels were always built on sacred sites. Most are found in Alberta, Saskatchewan and the Northern United States. The sites were often at the intersection of rivers, on mountain tops, in the center of plains between mountain and rivers. People could get there via the rivers. Even today, the waterways and mountains will lead you to medicine wheels on sacred sites. They were often on the high places, a point to look at the distant landscape. In any case, the places were deeply sacred. When you go to a medicine wheel or circle, you can feel the energy. They are in places that are the intersections of ley lines, energy lines, places where churches, and later sacred sites were built intuitively by more recent peoples.

We like to encourage all our readers, clients and partners to share their stories with us. Stories of travels together with us and our partners, unforgettable or fun memories, stories that relate in any context to one of our themes winter wonders, discovery drives, native encounters, cowboy experiences, nature secrets and adventure dreams.